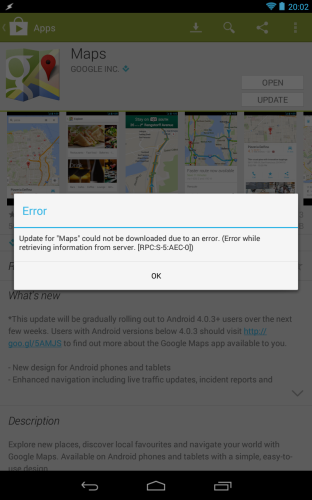 I know Google love their adverts but I wasn’t expecting this in Chrome.

Google Glass would be a whole load less appealing if adverts popped up as you walked down the street. Of course, that will never happen.

I’ve been an iOS user for 5 years now which is natural as I also use Macs. I love the devices and software but in doing the podcast and seeing so much momentum with Android I had an itch – I really wanted an Android device to play with. I didn’t want a phone as that would involve a contract and I didn’t want a device that had a companies UI grafted on top of vanilla Android. So when the Nexus 7 was launched it seemed to be the ideal device for me to get. The price drop/increased spec’s at the start of November made the choice even easier so I picked up a 32GB Nexus 7 in the middle of November.

As I already have a iPad and iPhone 5 (both new this year) it’s definitely a luxury purchase as it wasn’t as if I had a gap in my gadget library but it has allowed me to compare the different form factors and understand their strengths and weaknesses. What I was most interested in was the software – how good is Android now that Jelly Bean (Android 4.2) is launched and how strong is the third party support? I hate the iOS vs Android posts on the web as the two camps are so entrenched it’s hard to get a view that’s accurate. At least buying the Nexus means I can form my own view and I can also be more informed about Android. I’m also a geek so it was a brand new device and ecosystem to enjoy.


I’m not going to cover the Nexus 7 hardware in detail but just mention some highlights. For a full review I’d read The Verge review from June 2012. So what do I like about the Nexus 7?

END_OF_DOCUMENT_TOKEN_TO_BE_REPLACED

Tony then takes the data and visualises it using Many Eyes Wikified. Very impressive and a site I hadn’t heard of or used before. Applying the same principles Tony has now applied visualisations to the Shadow Cabinet spreadsheet.

Only slight snag I can see is that spreadsheets are easy to change and hence the visualisations could break easily – more easily than a database would. Apart from that though I’m very impressed. I’m off to dabble!

Just read through the comic that announced Google Chrome. Comic? Google Chrome? Google Chrome is the name of the long rumoured browser that Google has been developing. The comic was sent out via mail today and describes the main features of the browser really well. Seeing as I’m hacking web based app’s more and more, Chrome seems to be ideal. In fact if it had bookmark syncing I’d give it a serious trial instead of Firefox. But then again, it’s not out yet and for all I know it could be rubbish. Doubt it though – could be another step forward for browsers, our most used app. *Update – official announcement on the Google Blog and admission that info leaked early. Beta available tomorrow. For Windows only initially, Mac and Linux to come.

So…data. Often the biggest problem in putting together mashup’s and web app’s is finding good reliable data sources. I’d posted before on where to find data sources and the good news is there is some movement in the UK. From the rather excellent Katy Lindemann is a post on freeing our data and how Show Us a Better Way is fronting a government initiative to free up data, mashup the data and has already made gigabytes of data available. The site also links to many web data sources, many that I hadn’t seen before. Time to get the thinking cap back on…and maybe download the iPhone dev kit again.

A couple of add-ons to Google Reader today. Firstly you can now add notes to content you share, or just plain notes. These are then added to your share stream which is something I’ve been meaning to add to the blog for a while. You should see my shared items to the right of this post unless you using, em, Google Reader. The other addition is a bookmarklet for your browser which lets you swipe text in your browser, add an optional note to the text and then post that content to your shared items list. This sounded like an excellent addition except for one silly flaw. I can edit the swiped content before posting to my shared items but there’s no mention that the edit was done by me. Looking at my shared items I’ve linked twice to the Google post about these new features. However I edited the second posting adding in ‘crappy little’ – see screenshot above. The only way to see the difference would be to click on the link to the Google post and check for differences. Not hot. In the stream to the right of this post because only links are shown the issue is hidden. You would need to subscribe to my shared items for it rear it’s head but surely it’s easier to prohibit editing as the note feature is there if you want to add your own comment? Just need to remember to share more now that it’s added to the blog.

Okay. My love of statistics knows no end. Three stat related topics, one of them seasonal, all of them useful..ish.

I hope to have my own further stat/review post up this weekend. Stand by for startling revelations!

Some bits and pieces from this weekend.

Hope everyone else had a good one.

Source code for K2 has now moved to Google Code – visit kaytwo project to get latest code. There’s also a page at the wiki showing plugins that K2 supports. Time to upgrade…again.

A great extension for Firefox – BumbleSearch. Can easily switch off shopping results from a Google search, search other sites from the same Google search page and also cross search ebay, Amazon, Digg etc. Can turn on search highlighting which makes finding info on a page very easy. Also has some sidebar note capturing functionality which I don’t use. Well worth installing.