Railroad Tycoon. Transport Tycoon. SimCity. SimCity 2000. Classic city or transport building games that I have fond memories off. The latest SimCity was a bit of a mess when it came out in 2013 and it was a full year before an offline and single player mode was introduced. So much potential ruined by EA. Step forward Paradox Interactive who recently launched Cities: Skylines. I bought it a week ago and it’s got me hooked.

Likes
When you start building your first city you feel a bit overwhelmed. There’s lots of road options, you need power, you need (clean) water and sewage disposal for your city to grow. However that feeling quickly passes and you soon realise that there’s a really rich toolset at your disposal to build whiter you want. Straight roads, one way systems, curved roads, roundabouts, tree lined suburbs – it’s all there.

The initial build area feels quite constrained but you quickly get the opportunity to expand and before long you realise there is a massive build area that you’ll do well to fill no matter how big your city grows too or how extended you want to make it. What helps is that the game, certainly at first, isn’t that hard. If you make some fundamental mistakes it can be costly to rip up and start again but generally the money will flow in and the transport and building options will unlock pretty easily…which is great! Instead of fearing money and the game getting tricky you are left to use your imagination and built the city you want.

There are many ways of influencing finances. Taxes, loans, budget tweaks and something I haven’t seen before – districts. You can split your city into districts and apply policies to those. So encourage green policies in one area and heavy industry in another, banning heavy transport near houses to help with the traffic flow through the city. It add’s another level of detail and greatly increases the feeling that you are in charge. The districts, like the city itself, can be named to whatever you like as can routes and even stores.

Graphically I’d say Cities: Skylines does enough. It looks good, is quick to move around the city and while most of the time you spend fairly zoomed out, you can drop right into the city and see what your individuals are doing, the routes they are going and the mess that your traffic is in – more of that later. What is captured is the feel of a city. There is loads happening at any one time and suburbs can feel quite sedate whereas heavy office and shopping areas feel really busy. 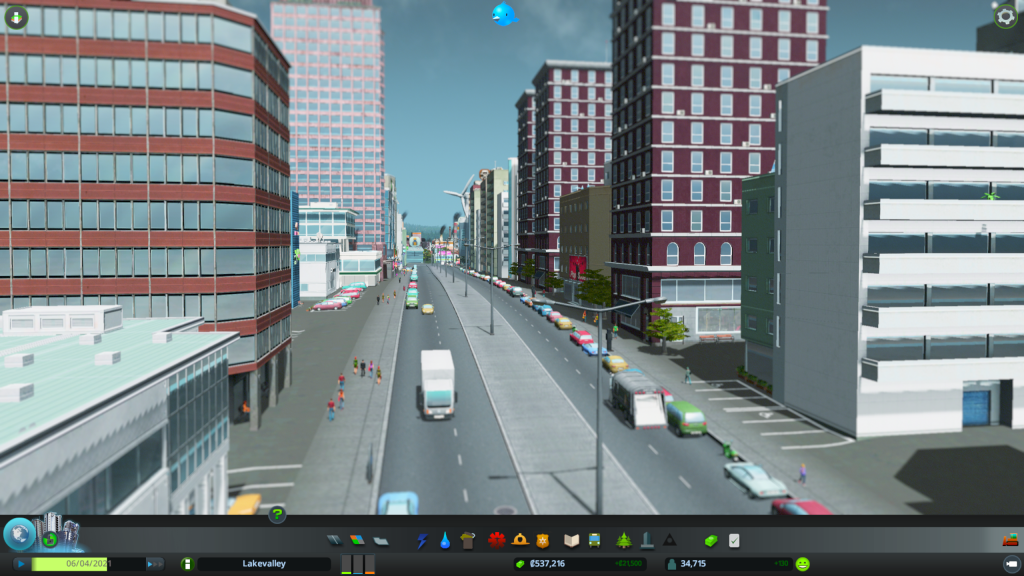 There’s also a lot of thought in the traffic/transport side of things. Bus routes, metro’s, train, ferry and airports plus policies that can be applied that affects traffic. With the various road types it leads to a lot of options and a chance to apply a lot of traffic management to your city…and you’ll need it as your city grows.

One thing that is missing are disasters – you won’t see a cyclone rip up your city or an earthquake. What you will have to get used to is destroying what you’ve built to make it better. Small early roads and buildings will need to make way for motorways and train lines and while this does replicate the growth of major cities it can make for some painful decisions.

Dislikes
For all thats good, there’s a fair bit of admin to do. Clearing out old buildings, water and sewage pipes…it can be a bit repetitive. There are ways around some of the pain but in many ways it’s a necessary evil.

It’s not as big an evil as traffic. With a game that gives so much control over traffic it’s frustrating that it seems to suffer from an over reliance on getting it absolutely right. If you are seeing bodies piling up, fires not being out out, an increase in sick people yet you’ve got an abundance of fire stations, cemeteries and hospitals then take a look at traffic. If you zoom in close you will see essential services stuck in pile ups of traffic and even with three lane roads there seems to be a build up of traffic in one lane. Hopefully this is a bug that will be fixed over time as traffic seems to be the biggest problem with the game right now.

There’s a mod for that
One thing I’ve not mentioned is the extendability within the game. You can enable mod’s that unlock all territory, gives you infinite money and there’s are loads being added all the time via the Steam Workshop. A few favourites are:

Mod’s just don’t affect gameplay, you can also download new buildings and graphics to change the look of your cities. Imagine where this will go if you could download a Halo set of graphics…or Game of Thrones.

As well as creating your own starting maps you can also download a great number via Steam…and the game has only been out a couple of weeks.

There’s also a tool to create your own height maps for the game – http://terrain.party. This is all thanks to this Reddit thread. The community already around this game is very good and a few good places to visit (apart from the publishers own forums) are:

You can also download save games from Steam so if you want to dabble with some amazing pre-built cities you can, or even manage Los Santos from GTA V or The City of Barrie.

Wrap-Up
Despite the flaws Cities: Skylines is a fantastic game and thanks to the large and active community and the steady flow of mod’s it’s got a long future ahead of it. If you are at all interested in management or simulation games then this is well worth a punt. It’s great for Paradox Interactive that they’ve not only built this superb game but it’s selling well and creating a great buzz. So long SimCity, you won’t be missed.