I’ve had an itch for quite a while. An itch to run. Folk that know me will know I’m not built for running. Always been big and not got a great engine so running is a bit of a challenge. After the hill walks my legs take days to recover and going back to school days, sprints were fine but cross country was awful. Despite all that, I still wanted to give it ago.

I kept putting it off. I was scared…of failure, of running in public. Daft but when you’ve got something like that in your head it can be hard to shake. However, if I want to run a 10k at some point I have to start somewhere so today was the day. Looking at Google maps I planned a straightforward door to door run which would take over 3km. The results are below and in more detail at RunKeeper. 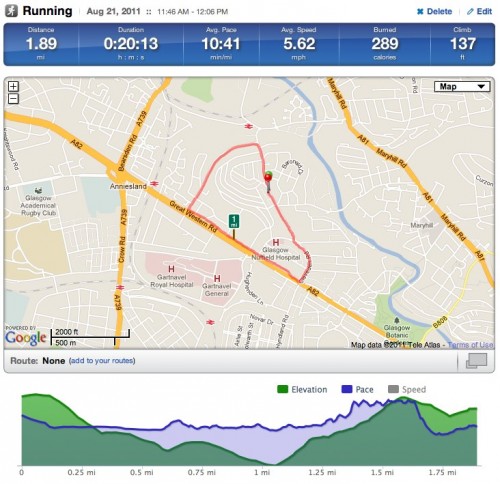 Main snag is that I live on the top of a small hill so whatever I do it will involve a hill of sorts. Kept the pace slow and it was going ok until the incline up Gt Western Road and the climb up Cleveden. I could feel a bit of stich coming on so had to stop. I walked up the hill and ran the last 200 metres. So overall not too bad.

However my legs did feel pretty sore afterwards despite the hill walking, cycling and badminton I do. The impact from running on the road is not to be ignored. The good news though is that I enjoyed the run so the current plan is to do the same route midweek and if that goes well (and assuming my legs feel good tomorrow) then I’ll pay a visit to Achilles Heel and sort out a more appropriate pair of running shoes that will help with the impact on the roads. I may also look into running offroad to help with the impact but baby steps for the moment.

Reason for doing this is twofold. I want to build up a bit more stamina and endurance and also help with the recovery after the hill walks. Secondly, it’s something different and it gets me outside and off the bike (which will still continue). Third (I did say two but who’s counting) is the inkling to run a 10k, maybe before the end of the year. Depends on lot’s of things but it’s good to have a goal when starting these things.

So more posts hopefully soon, even if it is to say my legs are buggered and I can’t go on! One final thing – it’s nice to be using RunKeeper for, you know, running!