Have you seen practices that you know could kill an Enterprise Architecture practice?  I have.  A recent LinkedIn thread asked for examples, and I came up with my top ten.  I’d love to hear your additions to the list.

How to screw up an EA practice

Your career will be short. 🙂

A generalist knows a little about a lot of things, and, crucially, how to connect them together. Good generalists are well aware that they are actually quite small fish in what is often a very big pond.

A specialist knows a lot about a single often very-little thing. Good specialists can be quite big fish, though only in a relative sense within their own often quite small pond. 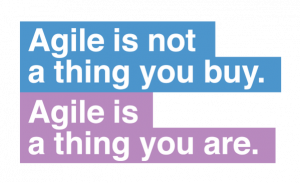 Combining agile and non-agile into a jerry-rigged mishmash misses the point of working in an agile way.

Being agile doesn’t mean you give up on governance or deadlines. The idea that agile somehow “needs” a waterfall-type methodology to give it control and governance is nonsense. When you work in an agile way, governance is built into every step of what you do. You build and iterate based on ongoing user research. You build what users need, not what you guessed might be a good idea before you even started building.

Life
A bit late with the update. On holiday from work (back tomorrow) and busy fixing the house, taking photo’s and flying a drone. Normal stuff really. Links this week are pretty Apple heavy – fun fun fun!

Media
Solo – average film and would have probably ditched it half way through if it wasn’t a Star Wars movie.

Bodyguard – well done all involved. Stuck the landing and plenty left to take another series forward.

Today’s the day that Apple release their biggest products of the year. New iPhones, new Apple Watches. Huzzah! From the keynote last week and also the reviews that have come out I’ve a few thoughts on this year’s products that are longer (almost) than a tweet or two.

So did I buy anything? No new iPhone for me this year. Small update really when you look at the iPhone X that I currently have and with phones now at £1k it’s an every 2-3 year purchase like an iPad for me. I did order a new watch though. The Series 0 has done well but struggled in the last 6 months with speed and also battery life. Really looking forward to getting the Series 4 as I use the Watch for workouts, notifications etc and being able to playback music and podcasts, answer calls etc without a phone during a workout will be a real step forward for me.

If you are getting a new phone or watch today (or next month!), enjoy it. The last year with the X has been great – easily the best phone Apple has made…until now.

Life
Weather has turned and I’ve got the next 10 days off. Woo hoo. The break will be good though no matter what the weather has in store.

Media
The Mighty Redcar – loving this. Great documentary – Redcar reminds me of Barrow. The soundtrack is also one of the best I’ve heard in years. Grab it on Apple Music or Spotify.
Jurassic World: Fallen Kingdom – Formulaic and predictable. Yawn.

Life
New toys arrived. Mavic 2 Pro – faster, longer battery, great range and a much improved image. A lot to like. Looking forward to some time off later in the month and getting some drone and normal pic’s out and about around Scotland.

Media
Bodyguard – gets better and better
Press – well made, great cast but flat opening for me
Hang Ups – so funny

Life
6 months since buying my last drone…I may have bought another. There’s no may about it, the Mavic 2 Pro is currently on it’s way from China. Can’t wait to fly it and see the image improvements.

Media
Finsihed All or Nothing but it got a bit samey though the season and the last couple felt very padded. Interesting insight.

Bodyguard on BBC. Oooof – loved it. Jed Mercurio is at the top of his talents right now and Bodyguard got off to a flier – the cast were top notch too.