Hard to believe but it’s 10 years since I moved from PC to Mac. 10 years! I’d been using an iPod for a few years when in 2006 Apple moved to Intel processors and updated their iMac design. It was all too tempting so I said farewell to viruses, tara to malware and hello to hassle free Mac computing. That was the plan and for the most part it’s been true. Here’s some thoughts on my Mac/Apple journey inspired by this post from Elaine Giles earlier in the year. 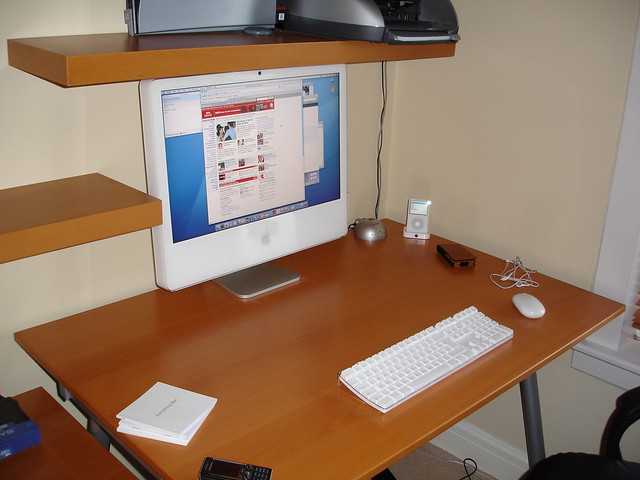 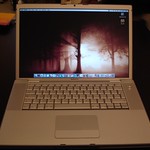 I loved that first iMac and picked up an 80Gb iPod at the same time. The first three months was so good that at Christmas I bought a MacBook Pro. What a great laptop that was. Fast, quiet, quick to boot and the design was to die for. 2007 saw the release of the iPhone but it just wasn’t for me. No 3G, no app’s. It was a lovely first phone but not enough to make me move. So I stuck with my Sony Ericson, remember them, and waited for Apple to update their Jesus phone.

iOS
2008 saw Apple release the iPhone 3G, iOS 2.0 and the App Store. I jumped in and picked up a 16GB iPhone 3G and bought far too many app’s on day 1. Super Monkey Ball, MotionX Poker and Twitterrific were all stand out app’s even in those early days. The iPhone and success of the App Store started a shift in focus for Apple, developers and consumers.

Subsequent iPhones increased in power and performance and I lapped them up. The 3GS, the 4 and 5 all followed and unlike other phones they kept their value in the second hand market remarkably well.

In 2010 Steve Jobs revealed the iPad. I still remember myself and Shak both dismissing it as a big iPhone…and then a few weeks later queuing for one at the Apple store in Glasgow. For me it was definitely a consumption device. Magazines, books and comics all worked really well on the iPad especially the retina model which came out in 2012. At the end of 2013 I moved to an iPad Air which I still use today.

I tried a couple of keyboards during the various iPad’s I’ve owned and went through a few different styluses but none really stuck. I did do a few work related tasks on them but the iPad remained mostly a media consumption device. When the iPad Pro’s came out I was close to picking one up but stuck with the Air mostly due to the cost and initially being unsure of the 12″ iPad Pro.

2014 saw me move to the iPhone 6 and this year I picked up an iPhone 7. It’s a fantastic phone but it feels the end of the line with a redesign likely next year. Competitors are using better components and catching up on the camera front…and many feel their phone camera’s are now better than the iPhone’s but at least the iPhone doesn’t explode.

Back to the Mac
So iPhone and iOS has become the focus for Apple but I still love the Mac. May 2011 and I upgraded to a new iMac. This was a great machine – 27″ screen, SSD and really fast processor. In fact it was so good (after a 16GB RAM upgrade) that over 5 years later I’m still using it. It still copes with most things I throw at it although there are two main shortfalls. It really struggles to process 4k video which both the camera and drone support and secondly it’s not a retina device.

This is also true for the MacBook Air I picked up in 2012. Non retina and not in any way a powerhouse but it does the job for me in a few key area’s that the iPad Air doesn’t. So apart from the iPhone my other Apple products are all getting long in the tooth. I almost forgot – 2015 and the Apple Watch. It’s been OK and Watch OS 3 makes a big difference but I’ve not moved on to the latest version until I see some app’s that will make a difference. I don’t need a faster CPU to get a notification more quickly.

The main reason I haven’t updated the Mac’s is mostly thanks to the slow progress that Apple have made with Mac hardware. Certainly the move to retina is great but if I look at the current Mac platforms, they are all old. Buy a Retina MacBook Pro today, which is probably their flagship Mac platform, and the hardware is over 500 days old. That’s shocking. How many people are buying a Retina MacBook Pro today not knowing that the inner hardware is that old. Same for the MacBook Air although I’m assuming sales of the Air are now very small – the bezel looks dated and it’s a non-retina screen.

The Mac platform is clearly secondary for Apple. The Mac App store is a mess in comparison to the iOS version. The latest Mac release, Sierra, has very little for Mac users. Compare Messages in iOS which saw a massive upgrade in iOS 10 to the Messages in Sierra. Crickets. And where is the hardware from Apple that would support any sort of VR headset? If you are in any way interested in the Oculus or Vive platforms then a Windows PC is the only option.

What’s Next
Over the next 18 months I’ll be replacing my iPad, MacBook Air and iMac…and probably my iPhone too! With iOS and iPhone I have no complaints and I love the platform. My current thinking is that I’ll replace the iPad and MacBook Air with an iPad Pro. No idea on size, but the keyboard and Pencil support of both Pro models will leave me needing only one device to replace the current iPad and Air.

As for the iMac, that’s a more tricky decision. My gut feel is I’ll update to the latest Retina iMac and sufficiently future proof it with fast CPU, SSD and lots of RAM. However I don’t think I can ignore Windows for much longer so I can see me also picking up a 4K second monitor (to replace the current non retina 27″ ASUS) for the iMac and plug in a Windows gaming PC that will allow me to play with one of the VR platforms. That purchase will wait for one of them to be seen as leading as at the moment it’s early days in the VR space.

I depend on my Mac, more than the iOS devices, and it’s where I get most of my work done. Unless iOS devices and iOS itself see’s some significant changes I won’t be able to shift to being iOS only so I do hope that Apple release updates to Mac’s soon – the platform needs some love! Despite my negativity I won’t be leaving the Mac though. Even some stale hardware and unloved Mac updates are better than Windows 10 and it’s woes. Here’s to the next 10 years with Apple.