Life
More crazy hours at work meant for another tiring week but hopefully thats all done for a while. Thanks to a quirk at our place and despite tomorrow being a UK holiday…we don’t get it so no rest for the wicked. Booking a week off in June though to top up the batteries.

Media
Caught up with Logan. Loved it even though the ending was telegraphed through the film. Finally a good Wolverine movie, and my favourite X-Men film.

Also got into Ready Player One, via Audible as I find long reading quite dull. Hour and a half in and I’m hooked. What can I say – #dannywasright

A few weeks ago the New York Times asked the question Which Tech Giant Would You Drop? Did you take the test? If you haven’t then give it a go, it only takes a minute. For me it was pretty straightforward. I would drop in the following order:

Since then both Microsoft and Google have had major events, Amazon have released new Echo devices and WWDC is only around the corner. I’ve also been thinking more about what I’d lose if each service was shutdown. These tech giants own so many products. Take a look at what would go if each one shutdown.

Facebook would still go first. I’ve been a bit harsh and missed out a couple of important products like Facebook Messenger, but Facebook would go despite my love of Instagram. Either people would flock to Flickr (ok, that won’t happen) or Google Photo’s would evolve to take Instagram’s place. Oculus isn’t doing anything that HTC’s Vive couldn’t and you’ve got Signal to take over from WhatsApp.

Originally I had Microsoft in fourth and Alphabet in third but it’s now a choice between Microsoft and Amazon. When putting the graphics together I was going to swap Amazon into fourth but one thing stopped me – AWS. How many app’s and services would disappear because AWS is no longer around? Azure competes really well but when I look at the Microsoft services I can swap them out for alternatives. PSN for Xbox, AWS for Azure, macOS for Windows and who needs LinkedIn or Bing? So Microsoft stays in fourth and Amazon moves to third despite the lure of Prime.

That leaves Alphabet and Apple. For me it breaks down to Apple for the hardware and O/S I use all the time, and Alphabet for the services I use all the time. For years I’ve preferred Apple’s hardware for it’s design and reliability but there’s no doubt that the shine has lessened in recent years.

I use Google services every day. Google Search is still my goto, Google Doc’s drive’s the podcast and has never let us down in six years of usage and YouTube really has no equivalent. However services are only as good as the hardware they run from and for me Apple still wins out in that front. Just. The speed of the iPhone is hard to beat and while the rest of my hardware is getting long in the tooth it’s reliable and I trust when I upgrade devices over the next couple of years I’ll get a great hardware boost.

Whats also helped has been Google (and others) making sure that they are available on all platforms, not just their own, so that all users can benefit and also so they can get access to as many eyes as they can. Compared to a few years ago it’s really a great time for users with the best choice of hardware and services.

Life
As expected the last week was busy and tiring but ultimately interesting and enjoyable. Hopefully more of the same next week with a few original twists to keep me on my toes.

Media
American Gods is well worth a watch, apart from that it’s been a week of catching up on podcasts.

Life
House fixing progressing….could be an expensive year. Apart from that work is pretty busy and the next couple of weeks will see some very early starts. Joy.

Media
Mario Kart is incredibly good. Finished off Billions this week as well which is well worth a watch.

Life
The weeks are flying by. Work is busy, health is fair to middling and there’s never enough time to do what I want. turning attention to some projects around the house – shit needs fixing.

Media
Guardians of the Galaxy 2 was pretty fantastic. Made me laugh, the visuals were top notch and the 3D wasn’t bad. Add on another great soundtrack and there’s not much to hate. Yes it follows a formula, but when done well it’s not an issue for me.

Also watched Nightcrawler (from 2014). What a great but creepy/disturbing film.

A couple of months back I posted about keeping active every day thanks to the Apple Watch. The tracking and alerts makes it easy to stay on top of what I’m doing and the activity seemed to be helping me health wise. Two months on, have I kept it going? 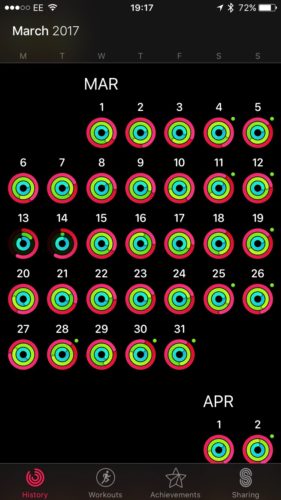 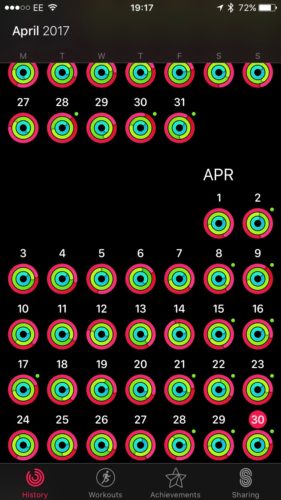 Apart from two days in March every day has been a circle filling day. Those two days were some of the most snot filled days I’ve had in a long time. Worked from home with a constant stream of snot from who knows where. Apart from that, every day I’ve been out and about keeping active. No running or cycling but walking to keep things ticking over.

I’m not too fussed about the missing days…I tell a lie. I’m more than slightly pissed off that my streak since Jan 16th has been broken by a fucking cold. Granted a stinker, but I’ve had days when I’ve felt worse and still went out and done things. As many others have said, it would be great to mark sick days in the Activity app and get a pass but then it would be easy to cheat. Cheaters always spoil the fun for the honest amongst us.

So will I keep this going? Probably but I’m not too fussed about keeping whole months. I certainly feel better physically and mentally for getting out and about more and intend to keep that up, even if it doesn’t help with any weight loss…but maintaining is good, right? I’ve also got my first audiobook to crack through over the coming weeks so that will help pass the hours. Onwards.