It’s 4 years and 8 months since I bought an iMac and moved to Apple. The 24″ model has done me proud over that time but I’ve been wanting to upgrade for a few months now. The latest upgrades saw me finally pushing the button. So what did I order? 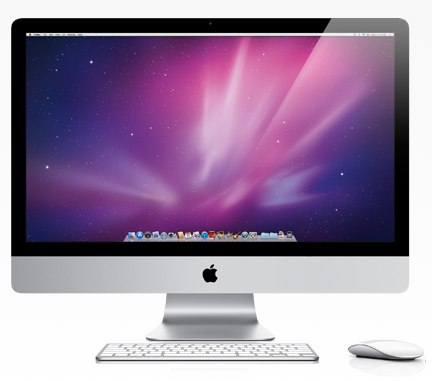 The works basically. A 27″ iMac will be winging it’s way to me shortly with an SSD, i7 CPU, fast graphics card and instead of a mouse (Logitech wins over Apple every time) I’ve went for a trackpad as with Lion coming soon I can see gesture support being heavily used throughout the OS and third party app’s over the coming year. I really can’t wait to see just how fast this thing is. The SSD will make a massive difference but that quad core CPU should chew through tasks. The only thing I didn’t upgrade was the RAM. Comes with 4GB, but Apple want £120 for another 4 – I can buy 16GB of Crucial RAM for the same price.

There’s only one snag. Ordered almost two weeks ago but the delivery date is still over 4 weeks away – June 24th. I hate waiting especially as Apple have grabbed the cash already. Grrrr. Still, nice toys on the way so can’t complain. Interestingly when I check on the status today the Apple page say’s come back tomorrow for more functionality – linked to rumours of Apple store updates on May 22nd?

Only downside to new toys is getting rid of the old iMac. Will probably sell on eBay but I never really like the eBay experience for a variety of reasons. It’s still worth a few hundred pounds though so needs must.

Another new toy soon – a car. No idea what I’m buying or when apart from ‘soon’. Need to consult with my friendly car geeks as I’m useless when it comes to cars. Looking forward to it though – the Focus is coming up for 10 years old. Showing it’s age and I’m getting bored with it.

In August last year I tried to walk up Beinn Ime via Beinn Luibhean but admitted defeat due to the wind. Roll forward 6 months and it was time to finally climb Ime. We set off early on Friday (cheers to Wills and Kate as we had the day off) and started from Succouth this time which meant walking between The Cobbler and Beinn Narnain before finally getting to Beinn Ime. The weather was glorious although quite breezy at ground level and the forecast higher up was winds touching gales in places and to be a lot colder than the 16-18C at the car park. The first 3 miles was a gradual ascent on a well crafted path that took us to the back of the Cobbler. We then veered right and started climbing Ime. The ground at this point was quite boggy and to be honest there was no well defined path, probably because Ime isn’t as popular as the other two peaks in the vicinity.

After 20-30 mins we picked up on a path as the climb became more strenuous. This took us up the majority of Beinn Ime. At this point the wind really picked up and it was pretty cold. Until now it had been shorts and t-shirt weather but a warmer top was required to get us up the final peaks. There were great views from the top but the sun started to hide between clouds and it became pretty hazy in places. At this point it was bloody cold – despite the great ground temp’s we were glad of hat s and gloves and some shelter behind a rock so we could grab some lunch. We didn’t hang around at the summit – just too cold but coming down off the main peak there was a great photo opportunity and the sun had popped out again – still really windy though. In the background to the photo above you can see the seaplane that takes off from Loch Lomond and the Clyde. I’ll need to try that one day when the weather is good – the views from it will be amazing. After taking some shots we made our way back down – we really covered ground pretty quickly on Friday as can be seen from the RunKeeper stats below. Even better – no midges to report which was a surprise. I just need to remember that my legs need sun tan lotion or they burn. Not clever. Next up is probably Ben Vane which leaves the more isolated Beinn Bhuidhe to complete the five munro’s that make up the Arrochar Alp’s. Hopefully we’ll get them both done by the middle of summer.

As usual, full set of Flickr photo’s can be found here.