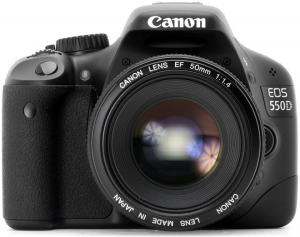 Over the last 9 years I’ve owned three different digital camera’s. A Fuji FinePix 6800, a Sony DSC-P200 and my current camera, the Panasonic DMC-TZ5. Each has seen an increase in quality and features and I still love my current camera. Compact but takes a great picture on a hill walk. But I’ve got an itch. That itch is the Canon EOS 550D.

I’ve said for quite a while I had no interest in getting a DSLR. Bulky, expensive and while I liked taking photo’s it wasn’t enough to make me invest. So whats changed? The hill walking has got me out and about a lot more than I used to. I’ve loved taking the photo’s as we visit different places around Scotland. I also think back to mine and Shak’s little tour around London just over a year ago. Again, I really enjoyed the photo taking and also getting the most out of the images via Lightroom. Final reason – video. Current camera takes video and at 720p but the quality isn’t the best so I’ve been thinking about getting a dedicated video camera. The video quality of the 550D looks to be excellent.

So, thats it then. Decision made. Mmmm, not quite. I’m still swithering. The cost is one reason. Once the camera is bought there’s the little matter of lenses. There’s a bewildering range from Canon, never mind the third party offerings. I’ve spent the last few days trying to pick my first lens or two and I’m no closer to settling on anything. Then there’s all the other little things – memory cards, bag and tripod plus all the other little things that I’ll get sucked into buying. I’m even struggling with how best to carry the new gear, if I get it, on my walks. Probably another 1-2 kg’s of weight and need to work out where best to carry it to make it accessible but keep it safe.

Despite my grumblings, no doubt I’ll post in a few weeks time about how impressed I am with the new camera. Once my mind is 90% there then that’s usually enough. One thing that Shakeel did mention was the number of stories around photographers being stopped by police and asked for details under section 44 of the terrorism act. I had seen a video by a Paul Lewis, a Guardian journalist, from last year of how the police challenged him using Section 44. I’d also heard of I’m a Photographer, Not a Terrorist which was setup to chronicle and fight the growing fear that photographers were being tagged as terrorists. As I dug a little bit more I was shocked by the growing number of photographers who were being challenged by police.

For example student Simona Bonomo was arrested, held in a cell and fined for photographing buildings in London. While you might think this a London only problem Robert Norbury from Leeds was challenged for filming buskers. One of the worst examples I found was Bob Patefield who refused to give his name and was arrested as police said picture he took at Christmas in Accrington town centre were suspicious and amounted to anti-social behaviour. Wow.

Media reporting on this topic has been sending out mixed messages. Back in Dec 09, The Independent reported that the Association of Chief Police officers had sent out a statement saying:

“Everyone… has a right to take photographs and film in public places. Taking photographs… is not normally cause for suspicion and there are no powers prohibiting the taking of photographs, film or digital images in a public place.”

Sounds good. Then on Jan 12, the BBC reported that the European Court of Human Rights rules that it was illegal for the police to use anti terror laws to stop and search people without suspicion. Sounds great except that the UK government is likely to appeal the decision. There’s a great article in The Times today that covers all the points so far and gives out some tips on what to do if you are stopped. Hopefully if (when) I do get the new camera’s it’s advice I’ll never need. We live in scary times.