There’s something about last weeks Apple event that just doesn’t sit right. It’s not really the event itself. It followed the usual format and first up was the iPhone 5. Larger screen, LTE, better camera, thinner, lighter, improved battery and an improved design. Twice as fast as the 4S it was a no brainer upgrade for me as I’m still using an iPhone 4. I’m really looking forward to the new phone as it’s quite the upgrade although I have to agree with Chris – I’d have kept the same depth of the current iPhone for a bump in battery life.

The iPod Touch saw a great step up as well whereas the Nano…not so much. A far better device than previous but so many wanted a watch sized device so the move back to the taller device hasn’t been well received. iTunes 11 promises…something. The app is so frustrating sometimes that I won’t believe it’s improved until I can actually use it.

One change that wasn’t so well received was the new connector – Lightning. It sounds so cheesy. Yes – we have Thunderbolt and Lightning. Worse, it’s still USB2 so I’m not expecting any speed improvements, at least not initially. I’m sure over the years we’ll see it support USB3 and Thunderbolt. For now it feels an inconvenience. How dare Apple change the connector that they’ve used for almost 10 years. But it had to happen. The dock connector has felt old for a few years. It was bulky and sometimes awkward to use especially on the Touch and iPad 3. Although frustrating spare a thought for Samsung users who in the same time that Apple has made 2 changes have went through 18. Wow. 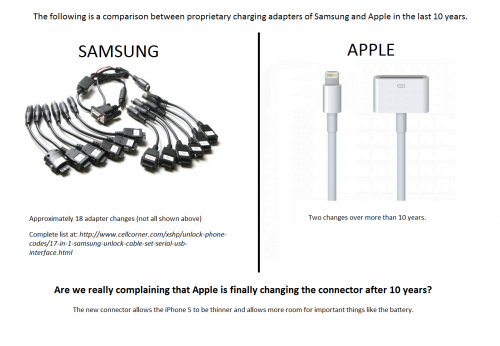 Biggest disappointment for me was the lack of anything new in iOS6 that wasn’t already known. Last year saw Siri as a surprise. This year there was nothing really – comments in shared photo streams is about the only new feature compared to what was shown at WWDC. I think iOS is the one area that is really starting to stagnate. Will next year see a big change in the operating system? Android is at least as good if not better now so Apple no longer have that as an advantage.

So a great new phone that will probably be Apple’s biggest seller yet. I don’t pay too much attention to the sellout claims of it being 20 times quicker than last year. No one has any figures to work against at the moment so it’s all just link bait.

And I think thats the area that doesn’t sit right. The tech community at large demands new gadgets. New features. New software. However the industry as a whole is one of incremental change. The S3 is better than the S2 but not drastically. Same with the Nokia 920. Ice cream sandwich was mostly polish and performance and low on new features (like iOS 6 and to a certain extent Windows Phone 8 or whatever it’s called this month). Looking at the iMac and the Macbook Pro it’s evolution each year.

I don’t mind that at all. Evolution of great products over time is a good thing. Improved speed and battery life are with incremental design improvements are great. I use this device every day and I love it. But after reading Everything Is Amazing and Nobody’s Insightful tonight I tend to agree with the author – the tech journalists demand more. It’s like an echo chamber. Each site posting leaks and reposting what they have read elsewhere. Leaks become fact due to the amount of blogs copying the same post over and over again. It’s getting boring. Not the technology. We’ve never had it so good. The tech blogs need controversy, they need amazing new machines to fawn over but most importantly they need clicks.