The new iPhone 4S is quite wonderful. It’s fast, the camera really is a step up over the iPhone 4 and Siri does indeed understand Glaswegian….mostly. It’s just a shame that Apple hadn’t mentioned before launch day that Siri in the UK wouldn’t support map or local business searching. No deals have yet been completed for the UK market although they expect it to be available in 2012. 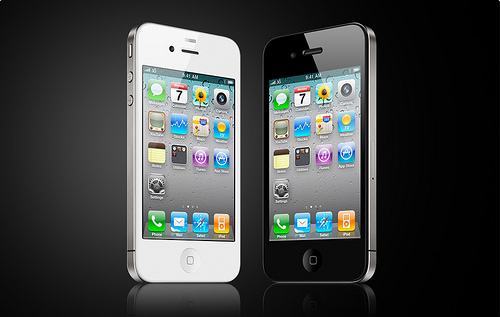 I even (still) like the design of the iPhone. In many ways it just works for me. It’s slender, easy to hold and still looks great when compared to the many many smartphones that have launched in the last 16 month since the iPhone 4 came out. Coupled with the improved antenna design and being a truly world phone, it makes the iPhone 4S a bit of a no brainer.

Now I said as much on the podcast last week, and until last Tuesday I was pretty much sticking to my guns. However I had a wobble and went out for a 4S on Friday afternoon thinking there would be plenty stock. That can only be described as a tactical mistake. The Apple stores had no stock and while O2 and Carphone Warehouse had plenty of iPhones, I didn’t want to commit to a contract or locked phone.

I didn’t order from Apple that night and in the cold light of a grey Glasgow Saturday I decided to stick with the iPhone 4. While the camera is a lot better, I don’t use it half as much as I expected. The speed would also be nice but in trying it in the Apple store it wasn’t that much faster, not to the same extent the iPad 2 was faster than the original iPad. Siri looks fantastic though and I would like to try it for real instead of in a store environment, but I have a niggle that without API support I’d be a bit miffed at only using it to interact with Apple’s official app’s. My twitter stream is also flooded with the great examples of what Siri can do…and there’s always Shit That Siri Says.

Don’t get me wrong, I think the 4S is a good upgrade from 4, but with other priorities right now and an iPhone 4 that is in perfect working order it makes sense to give this one a pass.

I must be getting old.

Despite the failing health, despite everyone knowing it was coming, it was still with shock and much sadness that Steve Jobs passed away today. Some amazing tributes online today from Google, Wired, Panic and Apple themselves. Stories from tech reporters, developers, CEO’s, competitors and the impact can be seen by how ordinary people, not just the geeks, are aware of who he was and feel a certain sadness. My favourite read was from Walt Mossberg – The Steve Jobs I Knew. RIP Steve.

Over the years I’ve moved between various browsers. Since moving to the Mac I mostly used Safari but towards the end of 2010 I made the switch to Chrome. It was fast, stable and had great extension support. But mostly it was fast. Safari had become really bogged down in day to day use. I partly blamed the browser and the hardware. Moving to a new machine meant a chance to try Safari again. Certainly performance was better but despite having lot’s of cores and 16GB of Ram at it’s disposal, Safari still felt sluggish from time to time or worse, would crash.

What was odd though was the lac of others reporting the same issues. Certainly I was using Saft with Safari to try and make it more usable but removing that on the old machine and not installing it at all on the new one meant that was eliminated. I’d installed flash blockers, removed Flash from my Mac and that didn’t help much either. Over the last few days though there’s been a few prominent Mac users expressing problems with Safari. Tim Bray discussed Safari’s re-architecture and how he expected that to be the root cause of Safari’s problems coupled with the heavyweight websites that we now know and love. John Gruber agreed with Bray and Marco Arment commented on seeing the same pattern, but putting it down to Safari 5.1 and not a Safari problem in general.

With Firefox 7 released this week (I do wish they stop with the version number games – almost 4 years covers versions 2-4 which came out in March 2011…and we’re now on 7. I blame Google.) I decided to do some of my own tests. Every browser release prompt’s speed tests, rendering tests etc and many many graphs, but does that reflect reality on my Mac? So I setup each of the browsers to be as similar as possible. Same amount of tabs looking at the same websites, same number pinned, as close to similar extensions on each browser too and compared Safari 5.1, Firefox 7 and Chrome 14.0.835.186. I rebooted the Mac and then opened each browser five times recording the time it takes to launch the app and refresh each of the tabs. Timings and thoughts on each of the browsers are below and for reference, the sites and extensions used are mentioned below.

Extensions
The following are the extensions I use day to day in Chrome. I tried to match them in Firefox and Safari but ultimately Chrome had the most extensions enabled as a couple didn’t exist for the other browsers.

Safari
The default browsers for Mac is Safari. It always felt fast and snappy but was short on features compared with the other browsers on the market. 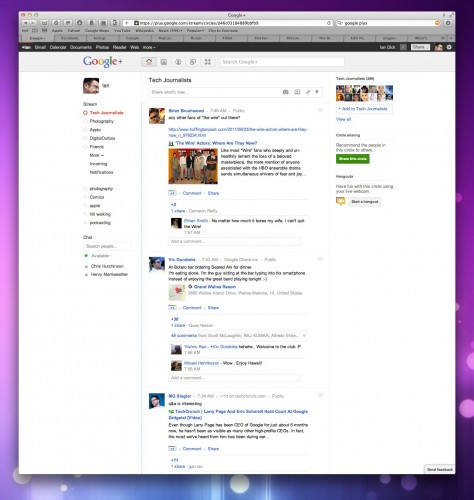 The look and feel of the browser has fell behind others, particularly Chrome. I miss not being able to pin tabs and also just see the favicons rather than the long tab names you see in Safari – just not as usable. Speeds have also deteriorated with each version. For my tests, the speeds are below. 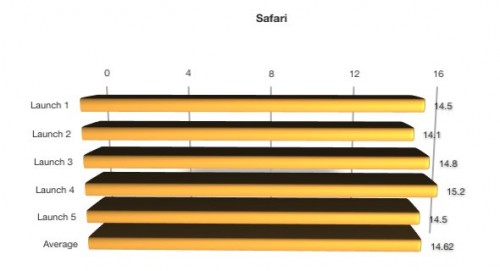 There’s quite a few tabs being refreshed so the time isn’t too bad, but even in general usage Safari feels sluggish. Moving between tabs and refreshing an individual page all feels slower than it should be. 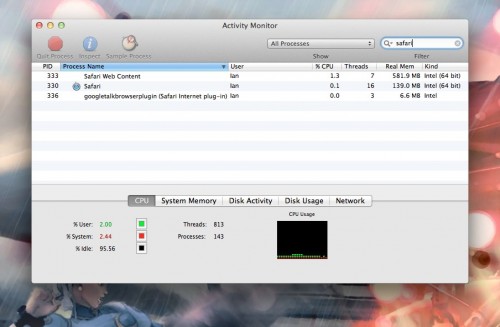 In it’s favour though, Safari is light on CPU and Memory usage but on my older machine I still preferred Chrome to Safari with less resources.

Chrome
Currently in third place in browser share behind IE and Firefox, Chrome is my default browser on the Mac and PC. 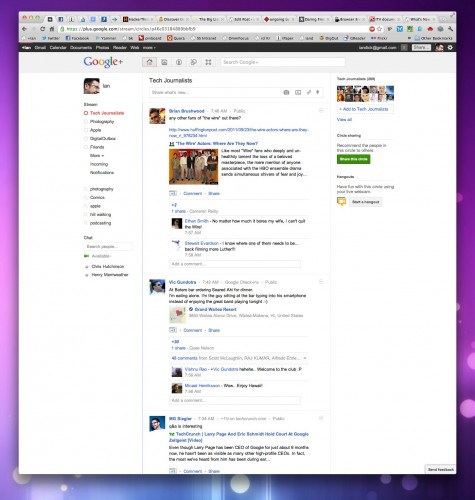 I like the ability to pin tabs and find the interface far more visually appealing than Safari or Firefox. It’s also fast and stable but while the browser itself never seems to crash, I am seeing more of the sad tab on certain sites, particularly Google+. 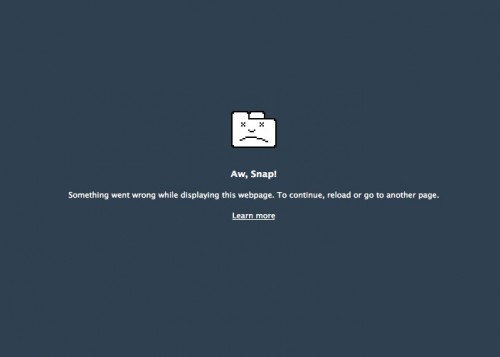 Performance is Chrome’s strong point alongside a fantastic amount of extensions. Even though it has the most extensions installed in this test it out performed the other two browsers by quite a margin. 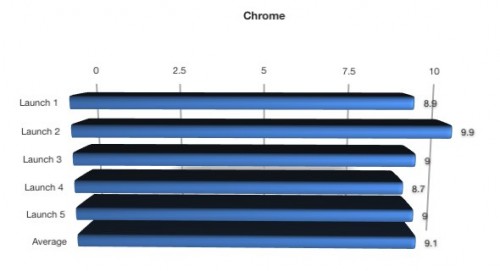 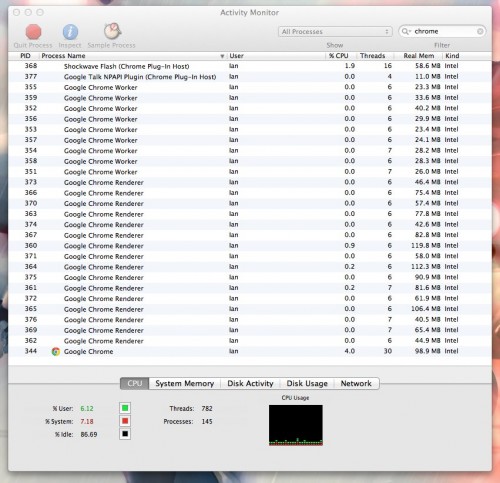 Chrome might be fast but it uses a lot more Memory and CPU. In practice it’s not something I notice but your milage may vary.

Firefox
Good old Firefox. Replaced IE when I was on Windows and helped break the mould on a variety of browser UI and functionality features. 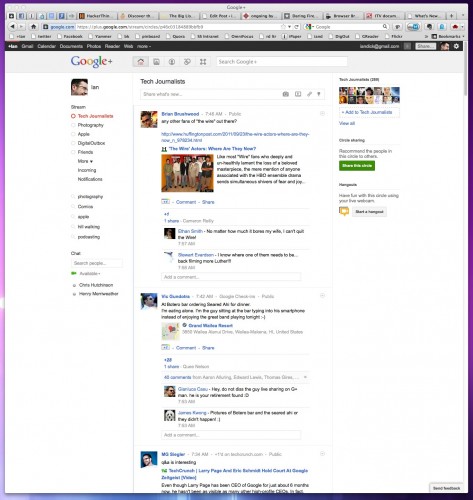 On Mac’s however I’ve found Firefox to be quite crashy and slow. It suffered from feature creep as it’s popularity grew and with popularity came the race to add more which took it’s toll on the UI and overall performance. Firefox 7 doesn’t look too bad, although it’s almost a clone of Chrome now and still doesn’t look as clean. 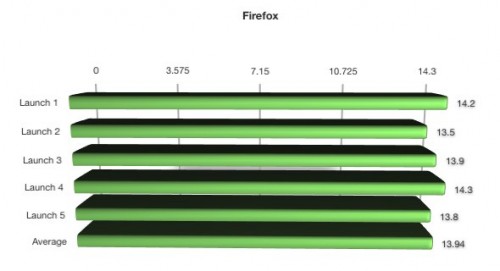 Newer versions have improved performance but for me it’s still a lot slower than Chrome as the above results show. 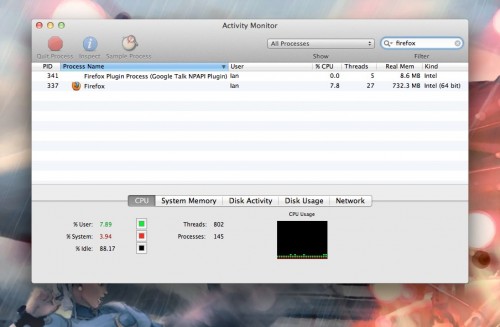 While Memory usage is low in comparison to Chrome, CPU usage was quite high.

Conclusions
So after comparing the three what are my conclusions? Chrome is still the faster browser followed by Firefox and Safari, and this can be summed up in the following charts. 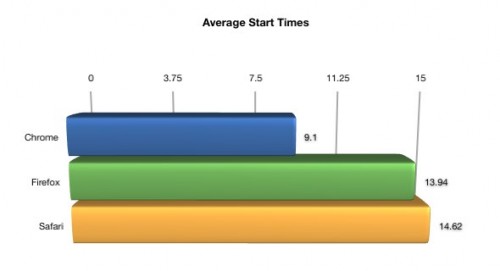 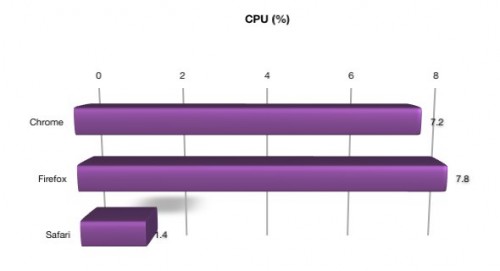 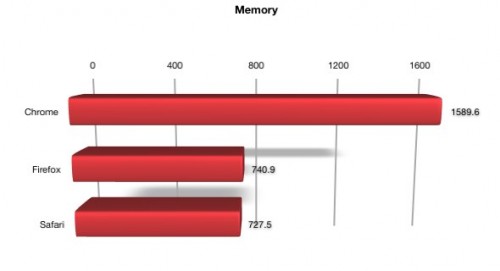 Chrome is faster not just in start up but on general usage as well. Coupled with the cleaner UI it will still remain as my default browser. Firefox has made some improvements over the last few months and seems to be more stable coupled with improvements in performance. Safari on the other hand has worsened over the last year. I’m hoping that Apples focus on Lion and iOS 5 is the cause and that Safari will receive some much needed TLC. It reminds me of how IE felt in Windows – usable but far better alternatives available.

With such a reliance on the web for both desktop and mobile computing the browser competition is hotter than ever. If you’ve not tried Google Chrome it’s well worth downloading and giving it a spin. Competitors have improved to try and catch up but with Chrome’s aggressive development it’s hard to ignore. What will the next couple of years bring to the browser – Amazon Silk for the desktop?