The Devil’s Pulpit is somewhere I had never heard of until a couple of months ago when Shak mentioned that a work colleague had recommended visiting as it’s a magical place. Some of the photo’s online looked great so early Monday morning we set off to get some sunrise pics and pay it a visit.

Devil’s Pulpit is formally known as Finnich Glen and is only a couple of miles south of Drymen so less than a 30 minute drive from Glasgow. Devil’s Pulpit is seemingly the name of a rock within Finnich Glen but over time has become the common name for the location. Getting to it is easy although there aren’t many parking opportunities. There is some parking available on the junction of the A809\B834 (56.034243,-4.419551) or you can park at Queens View car park and walk for 2 miles. We chose the former and had a short trek through a field before clambering over a small fence to find the path.

The path takes multiple routes and while obvious in the daytime in the dark it was a bit tricky to make sure we were on the right one. It was also pretty muddy thanks to the recent weather in the West of Scotland. After 10 or so minutes we finally arrived at the top of the steps down into the Glen itself. We decided to wait until the sun was up as there was a chance of a really good sunrise and we wanted to tackle the steps in more light. 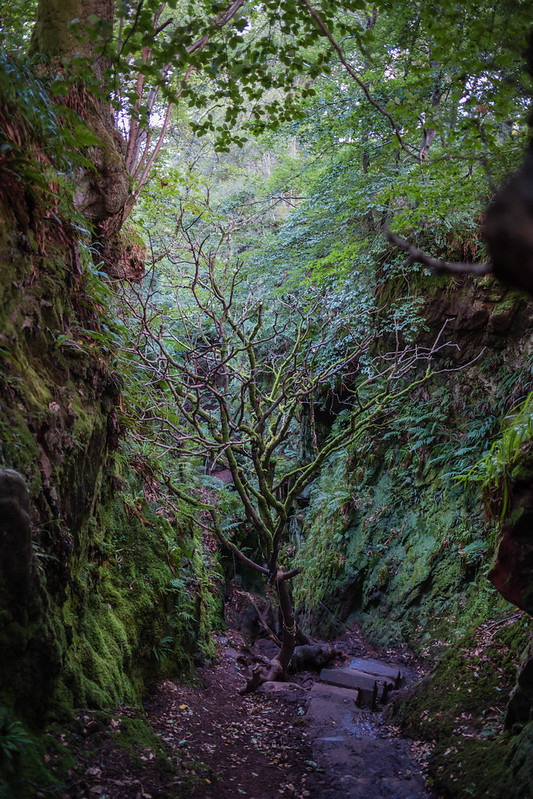 The steps were laid in the mid 1800’s and it shows. They are worn, sometimes missing and very slippy. We took our time going down and in a couple of area’s it was very tight. Someone has placed ropes to help but we never used them – not sure how safe they are. Once down we started to explore and take some pictures (video courtesy of Shak)

The area isn’t that big but ripe for long exposures. We had a couple of ND filters with us but it was pretty dark so didn’t really need them most of the time. I’m pretty pleased with the photo’s from the day and the full set can be found on Flickr. 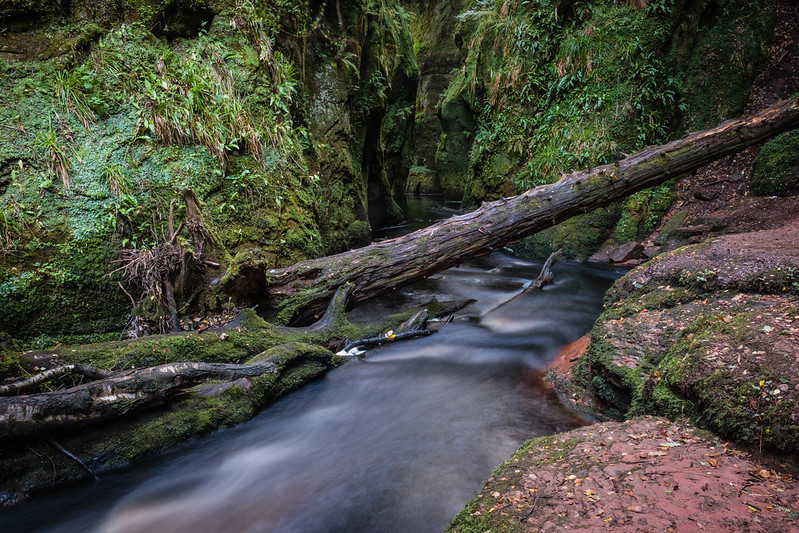 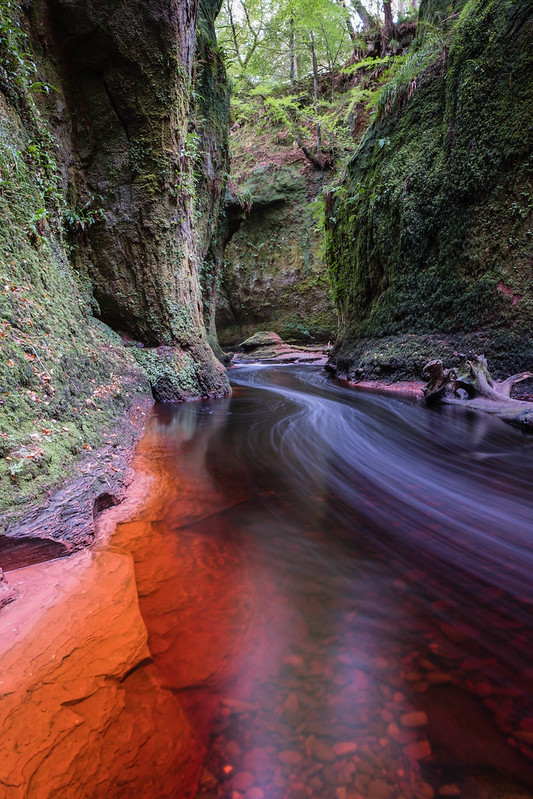 The Devil’s Pulpit is well worth visiting but make sure you are wearing some good boots especially if there’s been recent wet weather. If you want to get more unusual shots a pair of wellingtons isn’t a bad shout either so you can wade through the water. It goes without saying that if you arrive in the dark you will need a torch – luckily I’d brought my head torch so we had some light to get us there safely. Also be prepared for a steep decent and a bit of dirt and mud so a change of shoes for afterwards or a towel to get cleaned up is worth taking. Mid summer might also be a better time to visit to try and get some more light into the gorge as there was very little of that when we visited. Enjoy and good luck!

I’m a bit later than normal with iOS 10 impressions and iPhone 7 thoughts this year. I didn’t take part in any of the public beta’s so iOS 10 was new to me when it was released on September 13th and I wanted to use the new iPhone for a while before jotting down my thoughts. So without further ado…

iOS 10
iOS 10 features a number of updates, some big but most not so much. A few thoughts on the new features first.

There’s some other small features elsewhere but overall a solid if unspectacular update. Performance on my iPad Air is a bit sluggish but other devices are all working fine.

iPhone 7
Tick-tock. Apple have followed the tick-tock model for phone design for a few years. iPhone 4 then 4S, 5 then 5S, 6 then 6S with each new number bringing a change in design while the S models were refinement. The iPhone 7 should have seen a new design but instead we got the ultimate refinement which see’s a slightly tweaked 6 design but given the iPhone 7 name. Most noticeable design changes were to do with colour finish of the phone. Jet black and black were the two stand outs for me. As I hadn’t upgraded in a couple of years I went with a black 128 GB iPhone 7. Some thoughts after 10 or so days with the phone…

The video above was from St Rules tower in St Andrews on a pretty windy day and apart from me taking the video in portrait I thought the OIS did a really good job of keeping things stable. On Monday I took a trip to Finnich Glen and despite some challenging conditions the iPhone performed really well.

Overall I’m delighted with the iPhone 7. Fast, great camera and the haptic and 3D touch improvements are unexpectedly good. Shout out too for the Apple leather case which is a step up on previous versions. Metal buttons make all the difference.

Apple Watch
The Apple Watch has been out for around 18 months and the biggest step change is watchOS 3. It’s made my watch actually usable for third party apps and killed some of the other features like it’s focus on messaging to provide a dock which contains frequently accessed app’s. The change in day to day use is pretty startling. I can now access weather and news without waiting for 30 seconds while it refreshed. Activity stats are also readily to hand and messages is still there but as an app alongside the others not in its own unique place.

It’s also easier to swap watch faces so you can have one setup for work, one for activity, one for travelling. Along with the easy switching there’s a couple of new faces. One focussed on activity and one which is Numerals and a very simple display. Extra customisation with regards complications and third party watch faces are clearly for a future watchOS version.

The upgrade wasn’t without issue though. The first few days it felt like the display would take slightly longer to switch on. I also had a lot of hassle with third party complications but it looks like they were all third party developer issues as subsequent app updates have resolved all the issues. Overall watchOS 3 is a great update.

Apple also launched Apple Watch Series 2. It’s interesting to see Apple focus on sport and activity over timepiece and luxury which the first editions were all about. The new watches have far brighter displays, are now water resistant to 50 metres and now have a dual core processor which is twice as fast as the previous watch. While important upgrades the biggest for me is built in GPS. This means a run or walk no longer needs the iPhone to track it accurately. If I was running right now it would be an instant purchase but for now I’ll stick with my current watch.

The Future
Apple iPhone 7 and the Apple Watch Series 2 are great devices. iOS 10 is a strong mature platform and watchOS 3 proves that Apple isn’t scared to rip it up and start again. The reimagining of the device thanks to watchOS 3 is fantastic. However it’s clear that exploding batteries aside, Samsung have caught up and in many ways overtaken Apple from a design perspective and pushing new technologies out to consumers. Apple really have to pull out the stops for next years iPhone or risk seeing more people shift to Samsung and Android.

It also needs to up it’s gain with regards Siri as it looks tired when compared to it’s competitors. I also wonder if next year is when Apple shows it’s AR hand? 2017 feels like a year when Apple needs to knock it out of the park. Can it?

New toys week. Fuji X-T2 has arrived and it’s awesome, Apple announced some new toys and while all pretty predictable I’ll have an iPhone 7 later this week.